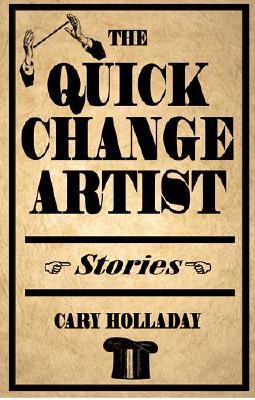 "These stories are strung together like pearls. They're delightful and engaging and heartfelt, with quirky characters and wonderful phrasings. A triumph!"

–Bobbie Ann Mason
"Cary Holladay ... is a poet of the unlikely screwball tale of possibility... Holladay is one of the most exciting voices in contemporary fiction."
–Robert Morgan
Real-life adventurer John Cussons (1838-1912) appears in several of these stories, which explore 100 years in the development of Glen Allen, Virginia, from post-Civil War Reconstruction to the days of rock and roll.

An excerpt from "Sailor's Valentine," which first appeared in The Southern Review:

Brandy decided it was time to do something with her parents' clothes, but she didn't know what. The dresses and coats looked sad hanging deep in the closets, waiting to be taken out and worn into the world again...She asked the old ladies, "What should I do?" and they said give everything to the church. So she did it. Bob helped her pack everything in cardboard boxes that bore the names of Virginia food companies: Pocahontas tomatoes, Tidewater herring roe, Sauer's vanilla, Graves Brothers apples. Brandy stuffed her mother's pocketbooks with the editorials from the Richmond Times-Dispatch and wrapped them up in the funnies. Her heart was caving in. It was a hot Sunday afternoon with the smell of honeysuckle coming through the windows and the cicadas singing outside and a few wasps crawling on the pale ceiling of the room where Brandy's parents had slept. Brandy put on her mother's old plaid winter coat, closed her eyes, and hugged herself--to feel her mother's embrace again,in the familiar cloth. So hot it was, in the sunny room, in the plaid coat. Sweat and tears mixed on her cheeks. She bent her head toward the boxes as she packed the coat away.

Everything went to the church, where it was given out to people who
were poor.Sometimes, in the years that followed, Brandy would see
her mother walking ahead of her on the road, but it was only some
woman wearing her mother's plaid coat. Brandy would wave as she
drove by, and the stranger would wave back--her mother's arm,
her mother's coat, who could say? ...

Three generations of a family in Virginia's horse country.

The Deer in the Mirror
Includes "Heart on a Wire," a story of the 1898 Klondike Gold Rush, winner the Glimmer Train Fiction Open.
The Quick-Change Artist: Stories

Set largely at a rural resort hotel, these 13 stories span 100 years of magic and passion.

The Palace of Wasted Footsteps